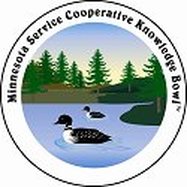 Knowledge Bowl is an interdisciplinary academic competition involving teams of four students trying to answer questions in a written round and several oral rounds. No team is eliminated in this event, and every team participates in every round. Knowledge Bowl is a power competition in which team groupings are rearranged after each round on the basis of their total points accumulated. The written round is a multiple-choice exam taken by each team as a whole. Results of this round are used for seeding teams in the oral rounds. In the oral rounds, there are three teams per room. A reader presents the questions, and a team member may buzz in as soon as he or she chooses. If they miss a question, nothing is deducted, but the other teams then may try to answer the question based on who buzzed in first. The winner is the team with the greatest number of points at the end of the meet.
SCHEDULE:
Check back soon – the 2017-18 schedule has not been posted.
KNOWLEDGE BOWL HISTORY
The first Minnesota Knowledge Bowl was started by the Lakes Country Service Cooperative of Fergus Falls, Minnesota, in 1979. The first season featured teams from only eight school districts in western Minnesota. Today, Knowledge Bowl has grown to include over 800 teams from across the state.
MEET FORMAT
Although there is some variation from region to region, most Knowledge Bowl meets follow the same general format. First is the written round. The written round (WR) consists of usually 60 multiple-choice questions with five possible answers listed. In the written round, all five members of the team may confer throughout the duration of the round.
However, in the oral rounds (OR), only four team members are allowed to participate. Thus, if a team has five members, one must sit out during the oral round. Oral rounds consist of three sets of 15 questions, 45 in total. Some regions play four oral rounds in a meet, others five. Oral rounds feature three teams in one room competing against each other for points. Teams may buzz in at any point during the question. However, they must then answer with whatever information has been given them. If a team buzzes in before the question is read in its entirety, the reader will reread the question for the other team(s), provided they have not yet buzzed in themselves. (The buzzer system is usually set up to have the teams buzz in in the style of the game show Split Second, i.e., the teams are called on in the order that they register in the game computer.)
Some regions randomly assign teams to play each other over the course of a meet, while others use "power ranking". Power ranking is simply the process whereby the top three teams are placed together in one room, the next three in another, and so on. While not all regions use the power ranking method, it is used in the Minnesota Service Cooperatives' State Knowledge Bowl Meet. In 2006, several regions tested a "Strength of Schedule" (SOS) meet format at meets using Power Ranking, and in 2007, this was made the official format. Using SOS, a team will receive a 1.5 point bonus for every round it spends in room 1, a 1 point bonus for every round in room two, and a .5 point bonus for every round in room three. The SOS points are not added to a team's score until after all of the oral rounds. In 2007, SOS was made official Knowledge Bowl procedure, and will be used at the state tournament.
POSTSEASON
All the regions throughout Minnesota utilize various postseason formats to select the teams that will represent their region at the state meet. Following the completion of the regular season, the region hosts a sub-regional tournament. In some regions, teams have to qualify by finishing high enough in the standings, while in others, all the teams in the region qualify for Sub-Regions. Following Sub-Regions, a certain number of teams advance to Regions. In some regions, the top teams receive a bye through Sub-Regions straight to Regions, while in others, every team has to qualify through Sub-Regions. At Regions, teams compete for that region's allotted number of State berths.
The 48 teams that qualify for State are ordered by enrollment and then evenly divided, with the larger 24 in Class AA, and the smaller 24 in Class A. All schools from the Metro Region (XI) are automatically placed in Class AA. If one private school qualifies, it is automatically placed in Class AA, regardless of size. If two private schools qualify, the larger is placed in Class AA, and the smaller in Class A. If three private schools qualify, the larger two are placed in Class AA, and the smallest is placed in Class A, and so on. The State meet is held in late April at Cragun's Resort in Brainerd
REGIONS
These are the ten/eleven regions throughout the state of Minnesota, and the city in which they are headquartered:
Northwest (I/II), Thief River Falls; Northeast (III), Mountain Iron; Lakes Country (IV), Fergus Falls; North Central (V), Staples; West Central/Southwest (VI/VIII), Marshall; Central (VII), St. Cloud; South Central (IX), North Mankato; Southeast (X), Rochester; Metro (XI), St. Anthony.  While the Northwest Region is designated Regions I & II, it is essentially one region, with all the teams from Northwest Minnesota participating in it.  While the West Central and Southwest Regions are both headquartered in Marshall and operated under the same auspices, they are essentially separate regions in which teams from their respective region participate apart from teams in the other region.
STATE TOURNAMENT
​The Minnesota Knowledge Bowl state tournament is held annually at Cragun's resort in Brainerd, Minnesota. The tournament is a two-day event, with the first day comprising a banquet dinner and the written round, and the second day comprising five oral rounds.

​TRI-COUNTY KNOWLEDGE BOWL QUALIFIES FOR STATE COMPETITION – FIRST TIME IN SCHOOL HISTORY!
Tri-County students: Adam Thompson(Senior), Sarah Budziszewski (Junior), Ellia Bass (Sophomore), Alayna Peterson (Sophomore), and Madi Larson (Sophomore), earned a 4th place finish at the Regional meet and qualified to participate in the State competition in Brainerd in April!  The team has placed consistently in the top six, including a first place finish at the beginning meet this season.  Brad Thompson is the coach for both the junior high and senior high knowledge bowl teams. Knowledge Bowl is a series of interdisciplinary academic competitions designed for students in grades 7-12. During the competition, teams of students compete in written and oral rounds by “buzzing in” and answering questions (similar to “Jeopardy”).
The questions relate to all areas of learning that are typical of secondary educational programs. In order to advance as far as the team did, they first had to qualify for the Region tournament, for which they earned 3rd place at sub-regionals.  Next, was the challenge of earning one of the top 4 spots, which were qualifiers to advance to the state tournament.  The team started in 5th place and moved up to 4th place and then settled into 6th place before the final round of questions.  They made one final push and moved up to 4th again, passing the 5th place team by 2.5 points, earning 106 points. Qualifying for the tournament has been just out of the team’s grasp for several years.  In the  previous three years, the team has just missed qualifying.  One of those years, they missed by just one half of a point.  This team had high expectations, as a few of the team had earned a perfect 1st place season (1st place in every meet) during their junior high season.
To earn this spot, the team had to beat teams such as Roseau, Warroad, Lake of the Woods, Thief River Falls, Fertile-Beltrami, Ada-Borup, Crookston, Kittson Central, and Fosston.  Tri-County was, by far, the smallest school competing in the Regional competition.Unfortunately, due to a scheduling conflict, the team will not participate in the State competition, but they are still very proud of their incredible accomplishments this year.  The 5th place team, Warroad, will go in place of Tri-County.